During penetration testing exercises, the ability to make a victim connect to an attacker’s controlled host provides an interesting approach for compromising systems.

Such connections could be a consequence of tricking a victim into connecting to us (yes, we act as the attackers ;) ) by means of a Phishing email or, by means of different techniques with the goal of redirecting traffic (e.g. ARP Poisoning, IPv6 SLAAC, etc.). In both situations, the attacker will have a connection coming from the victim that he can play with. In particular, we will cover our implementation of an attack that involves using victims’ connections in a way that would allow the attacker to impersonate them against a target server of his choice - assuming the underlying authentication protocol used is NT LAN Manager (NTLM).

The oldest implementation of this type of attack, previously called SMB Relay, goes back to 2001 by Sir Dystic of Cult of The Dead Cow- who only focused on SMB connections – although, he used nice tricks especially when launched from Windows machines where some ports are locked by the kernel.

I won’t go into details on how this attack works, since there is a lot of literature about it (e.g. here) and an endless number of implementations (e.g. here and here). However, it is important to highlight that this attack is not related to a specific application layer protocol (e.g. SMB) but is in fact an issue with the NT LAN Manager Authentication Protocol (defined here).

There are two flavors for this attack:

In a nutshell, we could abstract the attack to the NTLM protocol, regardless of the underlying application layer protocol used, as illustrated here (representing the second flavor described above):

Over the years, there were some open source solutions that extended the original SMB attack to other protocols (a.k.a. cross-protocol relaying). A few years ago, Dirk-Jan Mollema extended the impacket’s original smbrelayx.py implementation into a tool that could target other protocols as well. We decided to call it ntlmrelayx.py and since then, new protocols to relay against have been added:

I won’t go into details on the specific attacks that can be done, since again, there are already excellent explanations out there (e.g. here and here ).

Something important to mention here is that the original use case for ntlmrelayx.py was basically a one-shot attack, meaning that whenever we could catch a connection, an action (or attack) would be triggered using the successfully relayed authentication data (e.g. create a user through LDAP, download a specific HTTP page, etc.). Nevertheless, amazing attacks were implemented as part of this approach (e.g. ACL privilege escalation as explained here). Also, initially, most of the attacks only worked for those credentials that had Administrative privileges, although over time we realized there were more possible use cases targeting regular users.

These two things, along with an excellent presentation at DEFCON 20 motivated me into extending the use cases into something different.

Value every session, use it, and reuse it at will

When you’re attacking networks, if you can intercept a connection or attract a victim to you, you really want to take full advantage of it, regardless of the privileges of that victim’s account. The higher the better of course, but you never know the attack paths to your objectives until you test different approaches.
With all this in mind, coupled with the awesome work done on ZackAttack , it was clear that there could be an extension to ntlmrelayx.py that would strive to:

Based on these assumptions I decided to re-architect ntlmrelayx.py to support these scenarios. The following diagram describes a high-level view of it: 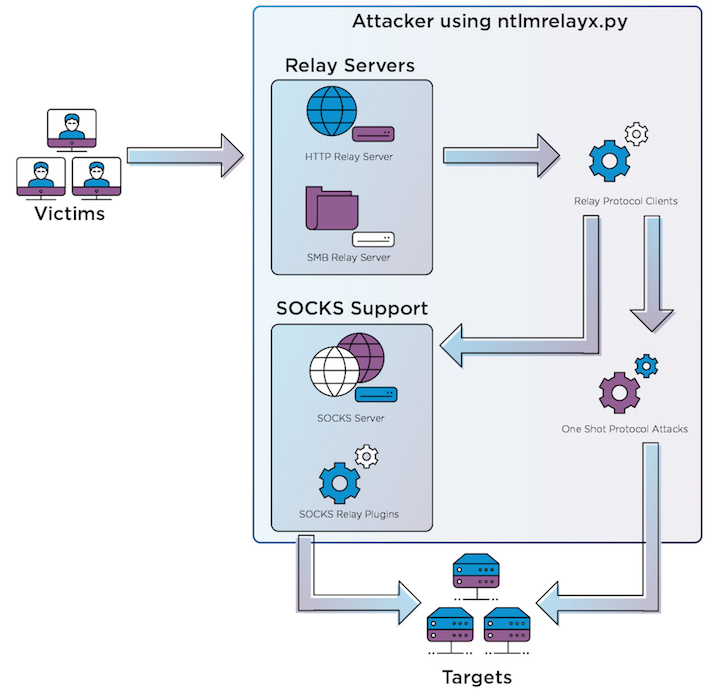 We always start with a victim connecting to any of our Relay Servers which are servers that implement support for NTLM as the authentication mechanism. At the moment, we have two Relay Servers, one for HTTP/s and another one for SMB (v1 and v2+), although there could be more (e.g. RPC, LDAP, etc.). These servers know little about both the victim and target. The most important part of these servers is to implement a specific application layer protocol (in the context of a server) and engage the victim into the NTLM Authentication process. Once the victim took the bait, the Relay Servers look for a suitable Relay Protocol Client based on the protocol we want to relay credentials to at the target machines (e.g. MSSQL). Let’s say a victim connects to our HTTP Server Relay Server and we want to relay his credentials to the target’s MSSQL service (HTTP->MSSQL). For that to happen, there should be a MSSQL Relay Protocol Client that could establish the communication with the target and relay the credentials obtained by the Relay Server.

A Relay Protocol Client plugin knows how to talk a specific protocol (e.g. MSSQL), how to engage into an NTLM authentication using relayed credentials coming from a Relay Server and then keep the connection alive (more on that later). Once a relay attempt worked, each instance of these Protocol Clients will hold a valid session against the target impersonating the victim’s identity. We currently support Protocol Clients for HTTP/s, IMAP/s, LDAP/s, MSSQL, SMB (v1 and 2+) and SMTP, although there could be more! (e.g. POP3, Exchange WS, etc.). At this stage the workflow is twofold:

Let’s say we’re running in -socks mode and we have a bunch of victims that took the bait. In this case we should have a lot of sessions waiting to be used. The way we implemented the use of these involves two main actors:

With all this information being described, let’s get into some hands-on examples.

The best way to understand all of this is through examples, so let’s get to playing with ntlmrelayx.py.
First thing you should do is install the latest impacket. I usually play with the dev version but if you want to stay on the safe side, we tagged a new version a few weeks ago.
Something important to have in mind (especially for Kali users), is that you have to be sure there is no previous impacket version installed since sometimes the new one will get installed at a different directory and the old one will still be loaded first (check this for help). Always be sure, whenever you run any of the examples that the version banner shown matches the latest version installed.

Once everything is installed, the first thing to do is to run ntlmrelayx.py specifying the targets (using the -t or -tf parameters) we want to attack. Targets are now specified in URI syntax, where:

Finally, after specifying the targets, all we need is to add the -socks parameter and optionally -smb2support (so the SMB Relay Server adds support for SMB2+) and we’re ready to go:

And then with the help of Responder, phishing emails sent or other tools, we wait for victims to connect.
Every time authentication data is successfully relayed, you will get a message like:

At any moment, you can get a list of active sessions by typing socks at the ntlmrelayx.py prompt:

As can be seen, there are multiple active sessions impersonating different users against different targets/services. These are some of the targets/services specified initially to ntlmrelayx.py using the -tf parameter.

In order to use them, for some use cases, we will be using proxychains as our tool to redirect applications through our SOCKS proxy. When using proxychains, be sure to configure it (configuration file located at /etc/proxychains.conf) pointing the host where ntlmrealyx.py is running; the SOCKS port is the default one (1080). You should have something like this in your configuration file:

Let’s start with the easiest example. Let’s use some SMB sessions with Samba’s smbclient. The list of available sessions for SMB are:

Let’s say we want to use the CONTOSO/NORMALUSER1 session, we could do something like this:

Just in case, using the Administrator’s session will give us a different type of access:

Now let’s play with MSSQL, we have the following active sessions:

impacket comes with a tiny TDS client we can use for this connection:

I’ve tested other TDS clients as well successfully. As always, the most important thing is to specify correctly the domain/username information.

Another example that is very interesting to see in action is using IMAP/s sessions with Thunderbird’s native SOCKS proxy support. Based on this exercise, we have the following IMAP session active:

We need to configure an account in Thunderbird for this user. A few things to have in mind when doing so:

You can even subscribe to other folders as well. If you combine IMAP/s sessions with SMTP ones, you can fully impersonate the user’s mailbox. Only constrain I’ve observed is that there’s no way to keep alive a SMTP session. It will last for a fixed period of time that is configured through a group policy (default is 10 minutes).

Finally, just in case, for those boxes we have Administrative access on, we can just run secretsdump.py through proxychain and get the user’s hashes:

From this point on, you probably don’t need to use the relayed credentials anymore.

Hopefully this blog post gives some hints on what the SOCKS support in ntlmrealyx.py is all about. There are many things to test, and surely a lot of bugs to solve (there are known stability issues). But more important, there are still many protocols supporting NTLM that haven’t been fully explored!

I’d love to get your feedback and as always, pull requests are welcomed.

If you have questions or comments, feel free to reach out to me at @agsolino.

Dirk-Jan Mollema (@_dirkjan) for his awesome job initially in ntlmrelayx.py and then all the modules and plugins contributed over time.
Martin Gallo (@MartinGalloAr) for peer reviewing this blog post.

Revisiting the Old and Looking at New Potential SAP Vulnerabilities

Ready for a Demo?

TRY IT FOR FREE